Grace Angel and some Table Talk 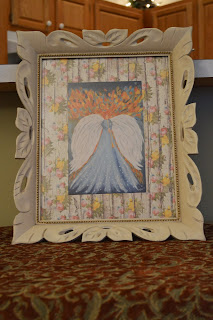 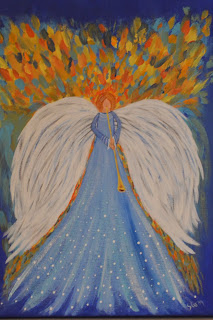 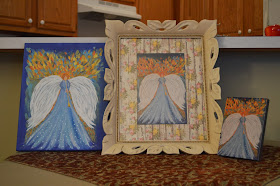 I received an email that thanked me for this post, although they suggested that the post was too brief and I didn't give enough information for beginners. So, everything in red I have gone back and added in with some more detail when possible.

Finished the Grace Angel!!!....Thanks to the magazine, "PaintWorks"....which gives great instructions on creating their works of art. The original design in the magazine was done by Debra Mills (PaintWorks, December 2013)...and yes, mine isn't as beautiful as hers, but the process in painting this angel was a true delight, and I think she came out beautiful too!

The magazine really gives step by step instructions, with most of their artworks having a template for tracing, although some projects give the templates in a smaller size, and stating you are able to access the original size on their website. I have never been too successful at tracing, well, actually the transfer process I have difficulties with. But sometimes just a small amount of line placement is all that is needed to get started; I don't have to have clear precise pattern marks, just an idea of where something should be placed.  Here is the website for PaintWorks magazine:

Plus....I was able to create other projects from taking pictures of my finished painting, and then uploading them to the kiosk machine at WalMart. And like I posted before, you have to have permission to replicate someones artwork or photography; if they know it's not your work, they will not print or reprint them. I also made Christmas cards from my pic of painting...and a 16x20 premium canvas reprint...looks like an oil painting...I already gave that away as a Christmas gift.

WalMart and Meijer both have kiosk machines in their photo development department. I have used WalMart's more often, mainly because it serves a smaller populated area (Hastings), so I usually can receive my projects within an hour. I have used my smartphone, which is capable of uploading photos with their cable to the kiosk machine. And my SD card from my Nikon camera, or any other removable SD card, or flashdrive; you just insert it into the machine when prompted to do so. I have also logged into my fb account on the kiosk machine, and was able to select pictures I have posted there. After loading your picture(s), you are then given choices on what projects to create.

My Mom, Martha, and I have a booth at Accents of Home, a consignment and vendor store in Caledonia (which is where I found that gorgeous frame for an 8x10 print I had made). Having a booth there is actually a lot of fun, but then I enjoy just being there, looking at all the stuff. I know...I told myself when I sold my ranch style home and got a condo, giving away a ton of "stuff", I didn't want to be involved with things I didn't need anymore...so, why did I get involved with a store full of stuff? Well, not only is it fun making, buying, and selling stuff...you meet people, and interesting people at that! And now that my Mom has started selling some of her stuff (and they have a lot!), we now have a booth together, and I get to see her more often...what a bonus!

My mother missed her calling as an interior decorator, although she would probably insist otherwise. She can also turn junk into treasure...she has an interesting artist's flair I have always loved. Although, she recently confessed to me that she just never showed me her created flops, which is hard for me to believe she ever had any. She loves laughing at mine though...which I'm not sure if that means she has more pride than I, or I have more vanity than pride...Ha! Joking aside though, I am grateful she can be honest with my creations.

My most recent decorating/creating "funny", was a small table I found at Accents of Home...I wanted to use it for a small dining room table, which would involve raising the height of it about four inches, which I did, then removed, and...well...to prevent you from almost peeing your pants from laughing, which I figured my Mom was going to, I will spare you all the details, but just saying it ended up being a firmly cushioned, wide table that butts up against my 42" bar counter, which can also be used for extra seating at the bar. I just loved the table too much to give it up...so I'm making it work wherever I can...Ha!

The big square of material setting on top of table/bench I already had. I just sewed tassels on by hand that I purchased from Hobby Lobby(no before or after pictures). My cat, Shade, loves sitting under there....she is very photogenic. I have found her in this setting often now (I'm not the only one that loves this table/bench!)...so, I have to give her a kiss on the forehead whenever I see her there...thinking she thinks it may be mistletoe, or maybe she hears the table talking to her too...Ha! 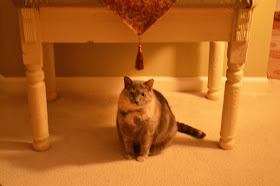 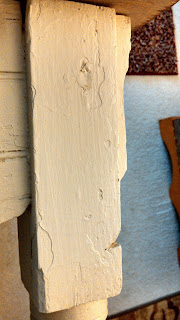 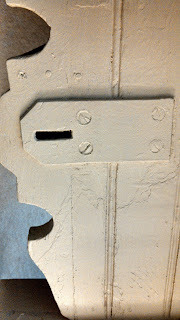 The table was already painted this color...the wood top I had trimmed down (courtesy of Ace Hardware; I gave my saw to Nick when I moved). After removing the table top by unscrewing it from underneath, then having it trimmed down to size, I then placed the 2" thick foam piece I bought at Jo~Ann's on the table top board to check for size. Then, I used some salvage fabric (actually was packaging material that came with something I purchased years ago...knew I'd use it someday, and was too good to just throw away). Before I cut the salvage material, I placed the board with the foam on it to ensure I had enough material to wrap around both to be stapled, and marked material where to cut (with whatever I have handy; pins, tape, or an appropriate colored marker). Then after cutting the material, I situated the fabric underneath as needed. When I had the fabric ready to be stapled on, I then just started putting some staples in, pulling and folding the material in whichever way it seemed less bulkier, keeping in mind not to cover up the screw holes, and if I did to make a mark on my board indicating its vicinity. I always find stapling the material at the corners a bit difficult, even if I read and look at pictures on how to do it. When all the material is stapled on, I then put the table body upside down on the board, lining up the screw holes. Then I reinserted the screws.

Using my brad/stapler hand gun, I also had to add a narrow strip of trim I haven't bothered to paint yet, just underneath the cushion...there was like an empty space of wood on both sides of table there...like someone had used salvaged boards to build it, or at one time there was something there that slid in and out, like a cutting board or something...it's quite the unique piece... 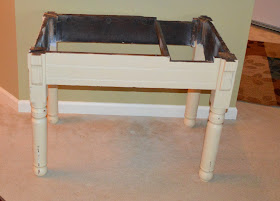 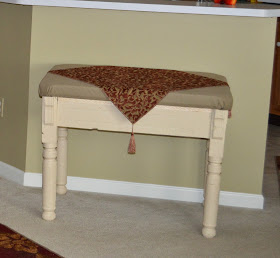 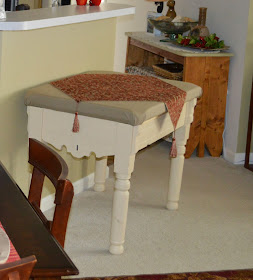 I've already had a very special someone christen/use the table/bench for a table...little Lizzy slid over a chair and started drawing and coloring with drawing paper and colored pencils and markers...a budding artist after my own heart...ahhh yes...those special people in life that make life so much sweeter!

Check out Accents of Home in Caledonia...
Sheri at 7:12 PM